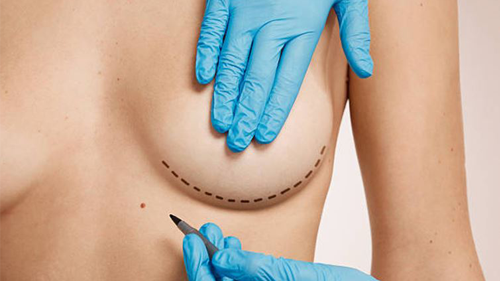 Who is qualified for breast augmentation?

Breast augmentation operations are among the most satisfying operations for our patients. The women who, for personal reasons, think that their breasts are too little or whose breasts shrink in volume after pregnancy may undergo a breast augmentation intervention in order to have well-contoured breasts proportionate to their bodies. In some cases, the breasts of a woman congenitally differ in size –which can be corrected by breast augmentation. In addition, breast augmentation can be used as a reconstructive technique after a breast surgery performed because of cancer or a trauma.

Which features do the implants have?

A breast implant is a silicone shell filled with silicone gel or a salt-water solution known as saline.

The usage of these implants differs depending on the condition of the person, on breast structure and the will of the patient.

Is it possible to find an implant which is suitable to my body?

Silicone implants produced by various firms are currently available in different structures and shapes. Thanks to this situation, together with the patient, we can decide on the size as well as the contour of the breast.

Do silicone implants cause cancer?

Health authorities worldwide have conducted detailed studies related to the suspicions that silicone implants cause cancer. The studies conducted have not detected any finding regarding an increase in cancer development with the use of silicone implants, and such suspicions proved to be groundless. On the contrary, it has been observed that the risk of breast cancer for patients with breast implants is 30% lower than the risk for normal women. However, such data should not be taken to mean that breast implants reduce the risk of cancer. For this situation may result from the reason that the women in the high-risk group may not prefer implant operations much.

Can anything else be used instead of implants?

In breast augmentation operations, fat injections may be used instead of implants in order to augment the breast. But this method is used for selected patients only. Fat injection may be performed on those patients who do not desire a major augmentation or those who have asymmetrical breasts. The augmentation achieved with this method may not be permanent and it may be necessary to repeat the procedure.

How should I prepare myself before the operation?

As in any kind of operation, you should not use anticoagulant medicines or similar drugs during the week before the breast augmentation operation.

Where are the breast augmentation operations performed?

Breast augmentation operations are performed in the surgery room of a fully equipped hospital.

Will I need to be anesthetized for the breast augmentation operation?

In breast augmentation, the most preferred types of anesthesia are local anesthesia and sedation. We can also perform the procedure under general anesthesia depending on the patient’s preference. In neither of these cases does the patient recall the operation process nor feel any pain.

How long does the operation take?

In general, breast augmentation operation is completed in an hour.

What kind of a procedure is performed during breast augmentation?

In breast augmentation operations, an incision is made through which the implant is applied. This incision can be made in the infra-mammary fold where the breast meets the chest, around the areola (the pigmented skin surrounding the nipple) or in the armpit.

What difference does it make to emplace the breast implant beneath the muscle or on the muscle?

Submuscular breast prosthesis implantation is believed to reduce the risk of capsular contracture. In this type of prosthesis emplacement, mammographic examination findings may be affected less in comparison to the method in which the prosthesis is emplaced immediately beneath the breast tissue. Nevertheless, submuscular implantation of the prosthesis may lead to a higher level of pain for a few days following the procedure compared to other types of implantation.

Will I need to stay in the hospital after the operation?

If you wish, you can stay overnight at the hospital after the operation but this is generally not necessary.

What will I experience after the operation?

Since only subcuticular sutures are used, you will not have to have your stitches removed.

You may feel tired for a few days following the operation, and during this period of time, you may have some pain which can be relieved by painkillers. However, you can normally start to move in 24-48 hours. Medicines will relieve most of the discomfort you may feel.

After a few days, the surgical pads –if any- are removed and you receive a surgical bra. You will need to wear this bra for a period of time.

Is breast augmentation a painful procedure?

You may have mild pain for a few days following the operation. In such a case you may use painkillers. Since your breasts may be oversensitive to direct stimulation for two to three weeks, you should avoid high physical contact. After some time and the pain disappears, physical contact with your breasts gives no harm.

Besides, you may have a burning sensation at your nipples for a few weeks but this complaint will fade away as the bruises disappear.

How long will it take for me to resume my ordinary life after the operation?

Depending on the level of activity your occupation requires, you will be able to turn back to work in a few days.

Will the operation leave any scars?

The operation marks will be rough and pink during the first 6 weeks. They will remain the same or even seem to expand for the following few months. After this period of time, the scars will start to shrink. Although the scars will never disappear totally, they will fade.

Will I experience loss of breast sensation after the operation?

Some women may report oversensitivity, loss of sensation or numbness at the nipple. You may experience loss of sensation limited with a narrow site around the incision. These symptoms are generally relieved in time.

What kinds of adverse situations may I experience after the breast augmentation operation?

Although breast augmentation operation is a relatively simple procedure, there are some risks related to the surgery and some complications specific to this procedure, as is the case in any other operation.

Being the most frequent problem, capsular contraction occurs as the scar around the prosthesis (the fascia) or the capsule begins to contract. The contraction of the prosthesis which has a soft structure may cause a feeling of hardness in the breast. Capsular contractures may be corrected by various methods. Sometimes it may be necessary to remove the scar tissue or perform the procedure called “scoring”, or even to remove or replace the implant.

Bleeding or infection may develop, although very rarely, as in any kind of surgical intervention.

A low proportion of women with breast implants have reported symptoms similar to those experienced by patients with immune system disorders (e.g., scleroderma, arthritis or other similar conditions). Although the conducted researches could not establish any clear correlation between breast prostheses and the disorders that the physicians call “fascia disorders”, FDA (Food and Drug Administration) has demanded a detailed research on this issue.

Does a breast implant deflate?

Rupture or leakage of the breast implants occurs only with extremely serious traumas. The implant must be explanted in such a case.

May it be necessary to explant or replace the prosthesis?

What if I get pregnant? Will I be able to breastfeed?

There are no findings which demonstrate any impact of breast implants on fertility, pregnancy or breastfeeding. However, if you have breastfed a baby during the year preceding the breast augmentation operation, lactation may occur for a few days following the surgery. Although a little discomforting, this situation can be controlled by medication.

Do the breast prostheses have a negative impact on mammography?

There is no evidence to suggest that breast implants cause breast cancer but prostheses may require a change in the mammography technique used for cancer screening. If you want to have a mammography as part of your routine controls, please consult a radiology center which employs technicians who are experienced in the special techniques that provide the kind of x-rays that is suitable for implanted breasts. With some of the women with breast prosthesis, the procedure called ultrasonography may be of assistance in evaluating the lumps in the breast or the condition of the prosthesis.